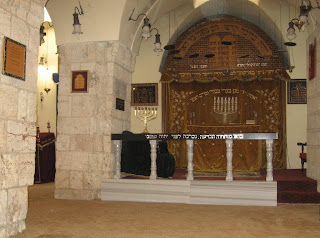 From the time of Caliph Omar, circa 637 CE, the Jewish community in Jerusalem resided primarily in the vicinity of the City of David over the Spring of Gihon which had in past years provided fresh water for the Temple of Solomon. During the time the Abbasid Caliphate controlled Jerusalem circa 750 to 1071 CE a Jewish community was established within the city walls. The Benei Mikra synagogue was built in the 9th Century by the Jewish Community of Jerusalem. It was destroyed in 1099 CE by the crusaders. Saladin reconquered Jerusalem in 1187 and the synagogue was rebuilt soon after. The synagogue is currently below street level as the city of Jerusalem has risen over the years.
Named "The House of Prayer of the Sons of the Scriptures" this synagogue has been in nearly continuous use by the Benei Mikra Jews since it was constructed.
Origin of the Karaite / Biblical Jews
Since the time of Moses there has been a continuous movement of Israelites and Jews who were dedicated to the observance of the original written Torah by its "peshat" or face-value meaning. In Chapter 8 of the Book of Nehemiah, the scribe Ezra and the Levites were able to read the entire Torah to a crowd of Jews and explain how to observe the laws contained in it within one day.
The Pharisee religious movement, which began around 300 BCE argued that the Torah was too difficult to understand and that scholarly sages have to explain it to the common people. Later these sages began to add to, and subtract from, the commandments contained in the written Torah. The historian Josephus, himself a Pharisee, claimed that the Pharisees had made several significant changes to Jewish practice and belief. Deuteronomy 4:2 forbids the addition or subtraction of commandments provided by the Torah (Mosaic Law). For this reason several religious movements, including the Sadducees, refused to accept the "reforms" offered by the Pharisees.
In 70 CE the Romans destroyed Jerusalem and the Jewish Temple. Following the destruction of Jerusalem and the Bar Kochva Revolt, Judaism and many of its various fractured religious movements virtually disappear from history. From the middle of the 2nd Century until the 6th Century CE very few records of Jewish history exist. In the 6th Century CE the Jews found themselves a minority in a now Christian Byzantine Empire to the West and increasingly Zoroastrian Sassanid Empire East. In Babylon (modern day Iraq) Jews began to write down a series of books collectively known as the Talmud that followed the Pharisee religious ideology.
By the 8th Century the sages, now called Rabbis, were spreading the Talmud to congregations of Jews throughout the world. They argued that the Talmud represented an "Oral Torah" that had been given to Moses at Sinai and passed down by word of mouth to the Pharisees. This "Oral Torah" is not mentioned in any book of the scriptures and the idea that any tradition could have been passed through so many generations, so many conflicts, and several periods during which Jewish religion was not even being practiced by most Jews, is ridiculous. It may be worthy of note that the Talmud never reached Ethiopia where the Jews continued to practice ancient Biblical Judaism, having no concept of an "oral law."
Many congregations refused to accept the Talmud and were coerced by the Rabbinic political authorities, who sought to enforce their standardized ideology. By the time of the Abbasid Dynasty of the Islamic Empire, these non-Talmudic Jews were given legal rights and allowed to form a religious movement outside of Rabbinic control. This new movement was dubbed the Karaite Jews or which translates to "Jews who observe the scriptures." Another name for the Karaite Jews is Benei Mikra or sons of the Scriptures. Over the centuries that followed the Benei Mikra slowly coalesced into a religious movement with its own sages (called Hackamim [wise men]), liturgy, and practices and traditions.
The Middle Ages

Benei Mikra Jews during the Middle Ages may have numbered as many as 40% the Jewish population in the world. The arrival of the Crusades, and laws barring conversion and inter-marriage both within and without the Benei Mikra community dealt a significant blow to their numbers. Benei Mikra scholars, nevertheless, contributed a great deal to the Jewish community and to the greater understanding of the various religious movements during in the Middle Ages. Jacob Al-Qirkisani, a resident of Isfahan (in modern day Iran), who lived in the 10th Century CE, recorded and described many of the Jewish, Christian, and Islamic religious movements that existed in his time. The Masoretes, who were responsible for preserving copies of the Hebrew scriptures, included among them several prominent Benei Mikra Jews. The Masorete Aaron Ben Asher, a contemporary of Al-Qirkisani, created the pointing system for writing Hebrew vowels that is still used in modern Hebrew. The Benei Mikra Jews continued to prosper for many centuries, despite shrinking numbers.
Recent History

In 1947 the Palestinians rejected a United Nations peace plan to partition Israel into a Jewish State and an Arab State. The resulting civil war saw victory for the Jewish residents and the establishment of the State of Israel. Upon its declaration of statehood, Israel's neighbors declared war and promptly invaded the small country. During that conflict the synagogue served as a refuge for non-combatants. Jordan captured the old city of Jerusalem in 1948. The synagogues in the city, including the Ramban (Hurva), Tiferet Israel, and the Benei Mikra Synagogue were destroyed. When the armistice was signed in 1949 the Old City was to remain in Jordan’s possession. Jews were forced to leave the old city. 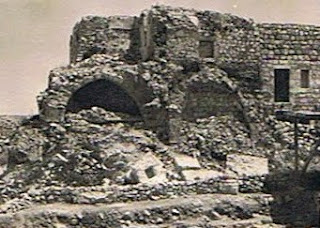 The Benei Mikra Synagogue as it appeared in 1967.
In 1967 Israel recovered Jerusalem and returned the synagogue to the Benei Mikra. A major renovation was undertaken that was completed in 1982. Today the Biblical Jews maintain this synagogue and hold regular prayer services there. The Benei Mikra number about 50,000 worldwide, with the largest communities in Israel and the United States. Smaller communities exist in Turkey (Istanbul), Europe, and China.
Please view the links (on the column to the right) for more information.
Posted by Hazzan Isaac at 6:08 AM 8 comments:

The ads shown are not endorsed by the publisher. 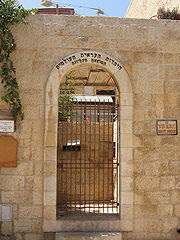 The Karaite Synagogue in 1967

Devistated by Jordan in 1949 the Synagogue was finally restored to the Biblical Jews by Israel in 1967. Renovation was completed in 1982. 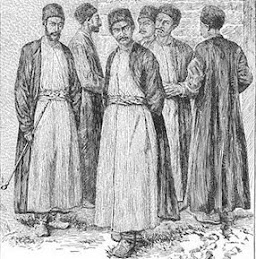 Karaites from the Crimea. 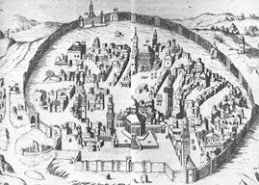 This is a drawing of what Jerusalem looked like when the Synagogue was built.